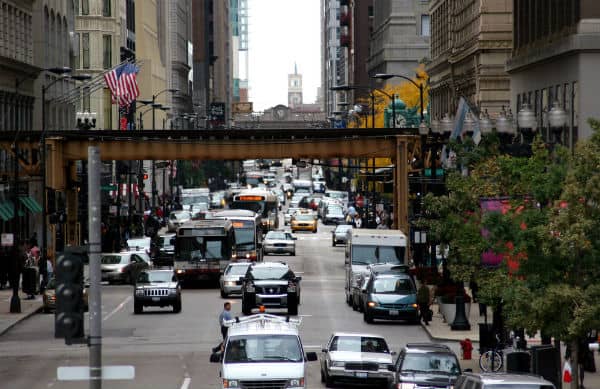 CHICAGO (November 20, 2017) – ‘Tis the season to battle traffic and long lines at the airport!

The holiday season is once again upon us, with Thanksgiving just days away! Besides the tradition of food, football and family, the holiday also means an increase in traffic.

In fact, AAA estimates nearly 51 million Americans will travel 50 miles or more this year between Wednesday Nov. 22 and Sunday Nov. 26 via planes, trains and automobiles. – the heaviest volume of travelers since 2005.

To avoid getting stuck in the heaviest traffic, avoid hitting the road between the following times, which the traffic app WAZE predicts will be the worst times to travel:

Thanksgiving week is traditionally one of the worst times of the year to fly. With airfare the cheapest it has been since 2013, this year will be no different. Nearly 4 million people are expected to pass through U.S. airports over the holidays.

AAA says the worst days to fly are the Wednesday before Thanksgiving and the Sunday after. They also warn that travel to local airports could be equally frustrating. Chicago may come in second place for longest commute times to a major airport, the Chicago Tribune reports. The absolute worst time to take the Kennedy Expressway between downtown and O’Hare International Airport is 4:30 p.m. to 5:30 p.m Tuesday, when it could take an hour and 14 minutes

As always, leave early and allow plenty of time to get through security.

Amtrak is preparing for the busy holiday week by adding trains and using every available passenger rail car in its fleet. Some service lines will also operate extended schedules with additional frequencies and added capacity during the week of Thanksgiving. People planning to use Amtrak are asked to buy their tickets early.

Those who use the Metra and CTA for their commute to work should be aware the agencies will be running on Sunday/ holiday schedules for Thanksgiving and will resume to normal schedules on Black Friday.

With the increased activity like this, travelers are encouraged to heed tips and reminders before trekking to see the family.

Our firm hopes these tips will help you and your family enjoy a safe and wonderful holiday season!