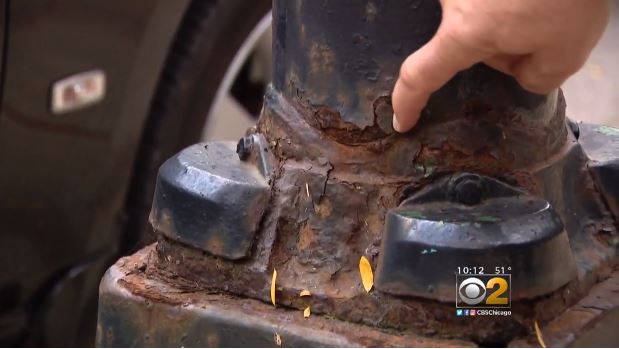 CHICAGO (October 19, 2017) – Old Town resident Lauren Lammy says her car was crushed by a rusted light pole that fell on LaSalle Street. Luckily, she was not in the car at the time of the incident. But, Lauren can only imagine what could have happened if the pole had fallen during rush hour.

That was in August 2016. Since then, CBS Chicago Investigators found more rusted poles along the same stretch of road.

And the problem isn’t contained to just the Old Town neighborhood. Last year, a pole fell onto a teen headed to school in Hyde Park. The CBS Investigators searched the area and found many rusted poles near the University of Chicago campus.

While the damage cost Lammy more than $3,500, the city did not compensate her for the damages. The Chicago Department of Law said it does not have to pay “because no one reported the pole was rusted out before it fell.” The city says it will be assessing the safety of every light pole in the city as part of a new program.

This isn’t the first time poor infrastructure caused damage or harm to an individual.

In 2015, 24-year-old Tierney Darden was standing with her mother and sister outside of O’Hare International Airport when a storm rolled through the area and a pedestrian shelter weighing more than 750 pounds became loose and fell onto Tierney. Tierney, who was a dancer and student at Truman College at the time, sustained dislocated vertebrae at T11-T12, which resulted in the most rare and significant type of spinal cord injury, a severed spinal cord that left her paralyzed from the waist down.

It was determined the shelter that injured Tierney had missing bolts. An investigation later found other shelters at O’Hare Airport were poorly maintained, with missing bolts, corroded parts, or broken brackets.

Salvi, Schostok & Pritchard P.C., attorneys filed a lawsuit against the city and in August of 2017, they obtained a record-setting $148 million jury verdict on behalf of Ms. Darden. The verdict represents the highest personal injury compensatory verdict awarded to an individual in Illinois State history.

Businesses, schools, governmental agencies and other organizations are required by law to create and maintain premises that are safe and free of hazards. An injury or death resulting from negligent design or poor maintenance leaves the injured person or their family with the legal right to pursue a claim for compensation against the property owner. To learn more about the merits of a case concerning a premises injury, contact our offices for a free, no obligation consultation.

In addition, if you see a light pole in the city that looks dangerous, you can report it by calling 311.