Teen distracted driving among teens has been a concern for many years. However, a new study reveals that the problem may be a lot worse than previously believed. It provides a troubling look at how teens tend to allow a variety of distractions to get in the way of driving safely – not just teen passengers and cell phones.

The AAA Foundation for Traffic Safety released the study, “Using Naturalistic Data to Assess Teen Driver Crashes,” in early April. The goal was to identify teen driving behaviors that lead to accidents – so those behaviors can be effectively addressed in driver education.

The University of Iowa researchers who conducted the study wanted to go beyond police reports, which don’t always give the most accurate picture of how a crash occurred. So, the researchers analyzed video footage from in-vehicle cameras. What the cameras caught was both predictable and a little shocking.

First, check out this montage of what the cameras recorded. Then, we can take a closer look at the numbers and their implications.

According to the study, the researchers examined videos of 1,691 crashes involving drivers between the ages of 16 and 19 between August 2007 and July 2013. Most of the crashes occurred in the Midwest. The video caught the six seconds just before accident.

The video footage showed that a driver was distracted – not paying attention or engaged in some non-driving activity – in 58 percent of the crashes.

Additionally, distraction played a role in causing a wide range of crashes, with driving off the road or plowing into a car in front being the most common types. 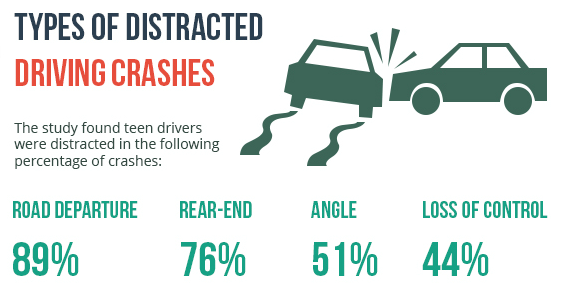 The two main distractions that contributed to crashes were somewhat predictable: Talking or otherwise interacting with passengers was present in 15 percent of the crashes, while using cell phones while driving was present in 12 percent.

Many states, including Illinois, restrict passengers and cell phone use by teens in order to address these specific, well-known risks.

Additionally, the study found that teens looked at their cell phones for an average of 4.1 out of the 6 seconds immediately before the crash. Given this lack of attention to the road, it should come as little surprise that, in roughly half of the rear-end collisions, the teen made no attempt to brake or avoid the car in front.

The surprising part of the study is that engaging with passengers and using cell phones were present in only a combined 27 percent of the crashes. A wide variety of other behaviors contributed to the teen distracted driving crashes, including: 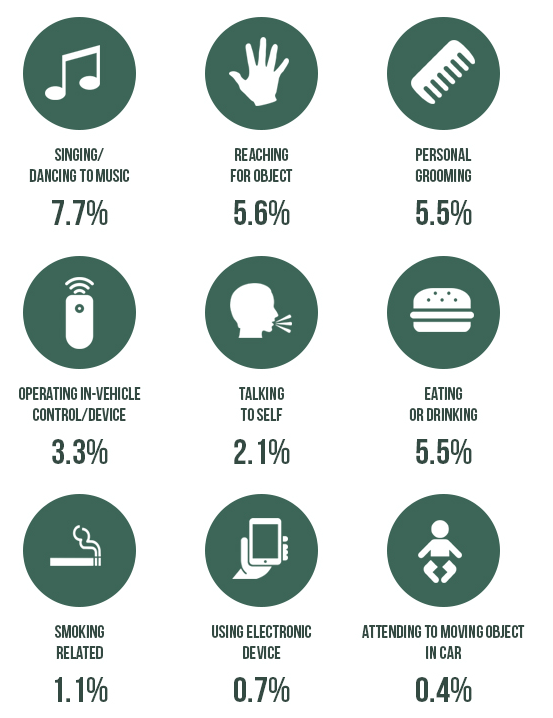 As you can see, even when a teen has put down his or her phone and is driving alone in a car, the teen can still be dangerously distracted.

Parents Should Stress the Need to Focus on the Road

A major implication of this study should be that parents need to talk with their teens about focusing on the road – and the road only – when they are driving.

In other words, parents should stress that operating a machine that weighs several thousands of pounds requires full – not partial – attention. Parents should tell their teen driver: Eating, drinking, putting on makeup or picking up something the teen has dropped on the floor can all wait until the car has come to a stop in a safe area.

If you believe that you or a loved one has been harmed by a distracted driver – teen or adult – you should take action to protect your legal rights. Contact Salvi, Schostok & Pritchard P.C. We work with clients in Chicago and throughout Illinois. We can provide a free, no-obligation consultation.