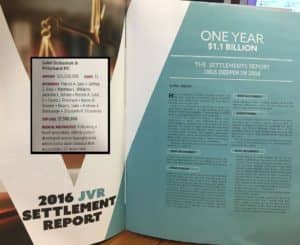 CHICAGO (October 27, 2016) – The Illinois law firm of Salvi, Schostok & Pritchard P.C., was highlighted in Chicago Lawyer Magazine’s 2016 Settlement Survey as one of the top law firms in the state.

“We are honored once again be recognized among the top firms in the state. The achievement is a testament to the hard work our lawyers put in on a daily basis,” Managing Partner Patrick A. Salvi said.

For more information on the law firm of Salvi, Schostok & Pritchard P.C., please contact Marcie Mangan at (312) 372-1227 or mmangan@salvilaw.com.