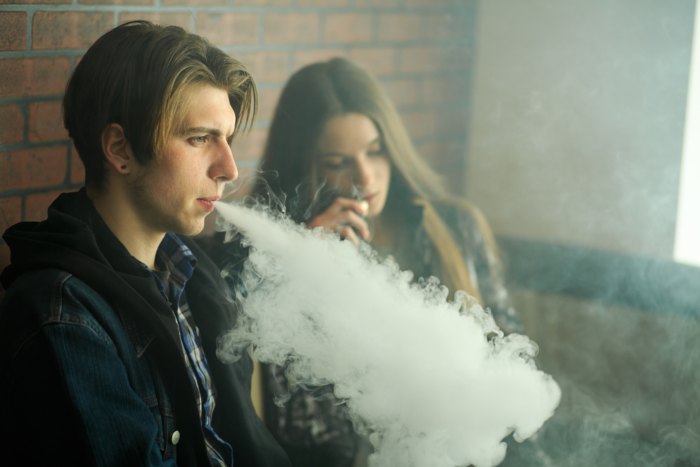 GURNEE, Ill. (September 13, 2019) – A Gurnee student athlete still has difficulty climbing up stairs after being hospitalized with “severe lung damage” caused by e-cigarettes, his parents say.

When 18-year-old Adam Hergenreder first began vaping about a year and a half ago, he was under the impression that e-cigarettes were safer to use than regular cigarettes and thought they “tasted good.”

“If I had known what it was doing to my body, I would have never even touched it, but I didn’t know,” the teen said, adding that it was scary to think about the damage that little device did to his lungs.

Experts say that one Juul pod — a cartridge of nicotine-rich liquid that users plug into the dominant e-cig brand — delivers the same amount of nicotine to the body as a pack of cigarettes.

But following days of persistent nausea and vomiting in late August, Hergenreder was hospitalized and doctors were able to realize the full extent of the damage.

“It was severe lung disease, especially for a young person. He was short of breath, he was breathing heavily,” a pulmonologist and critical care physician at Advocate Condell Medical Center in Libertyville said. “If his mom had not brought him to the hospital within the next two to three days, his breathing could have worsened to the point that he could have died if he didn’t seek medical care.”

During his time in the hospital, the former varsity wrestler’s lungs were only inflating with the help of a machine.

After being released from the hospital, Hergenreder told CNN he still finds it “difficult to even do normal activities, like going up stairs,” which leaves him winded. His future with sports is also in jeopardy.

On Wednesday, one day after Kansas health officials confirmed the sixth vaping-related death in the United States, the Trump administration announced its plans to crack down on vaping, especially when it comes to teens. The Health and Human Services Department announced plans to completely remove flavored e-cigarettes from the market, save for tobacco-flavored products, noting that about 8 million adults and 5 million children are currently vaping.

“This is an important step in response to the epidemic of e-cigarette use among our Nation’s youth, and will help protect them from a lifetime of nicotine addiction and associated health risks. Clearing the market of non-tobacco-flavored products is important to reverse this alarming epidemic. We must do everything we can to reduce the use of e-cigarettes among middle and high school students,” CDC Director Robert Redfield said.

The Centers for Disease Control is investigating more than 450 reported cases of severe lung illness linked to vaping and has urged Americans to avoid vaping while investigations into the deaths and illnesses proceed.