We Answer These Questions On This Page 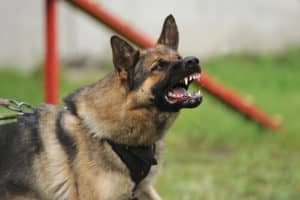 Dogs can be ideal companions. They can be very cute, sweet and friendly. They can also be smart, powerful and highly loyal. They can comfort us, and they can protect us.

However, as attorney Brian Salvi pointed out in a 2016 WGN Radio interview when discussing dog bite claims in Illinois:

“At the end of the day, they are animals with instincts. Sometimes, those instincts take over, and they hurt people.”

Get Your Free Consultation Now

What Makes Dogs Aggressive and Dangerous?

An estimated 4.5 million dog bites occur in our country each year, according to the Centers for Disease Control and Prevention (CDC). Statistics show that young children and elderly adults are the most common victims of these attacks – perhaps due to their inability to fend off or evade an aggressive dog.

Why do dogs bite?

The American Veterinary Medical Association (AVMA) took a close look at this question and identified several reasons why dogs may become aggressive and dangerous. Those reasons include:

The American Society for the Prevention of Cruelty to Animals (ASPCA) also examined why dogs attack. The ASPCA identified factors such as:

Are 2.6 times more likely to bite than dogs which have been neutered.

What Are the Most Dangerous Dog Breeds?

It is a widely held belief that pit bulls are the most dangerous breed. In fact, the website, NationalPitBullVictimAwareness.org, is dedicated entirely to this issue. The site suggests that hard facts support concerns about the risks posed by pit bulls.

According to the site, the City of Chicago Commission on Animal Care and Control reported that, in 2012, pit bulls and their mixes accounted for 44.3 percent of all reported dog bites in the city – the most of any other breed.

Several years ago, the CDC released a study that analyzed data from a 20-year period in order to determine which dog breeds are most often responsible for deaths in our country. Can you guess which breed topped the CDC’s list?

Note: Figures represented reported fatalities from 1979 to 1998. When multiple dogs of the same breed were involved in a single incident, the CDC counted each dog individually. The CDC calls this a “dog-based approach.”

Which Cities Have the Highest Number of Dog Attacks?

While it is difficult to find a tally of the total number of dog attacks that occur in cities each year, the U.S. Postal Service (USPS) does provide an annual report on the number of attack that its employees suffer. In this sense, the USPS report can give us an idea of the cities where dog bites most frequently occur.

Houston had the highest number of attacks in 2015 with 77, or 14 more than were reported during the previous year. Chicago tied Dallas at No. 3 on the list with 58 attacks, marking a 24 percent rise from the year before.

What Are the Most Common Dog Bite Injuries?

Regardless of which breed attacks, a dog bite can lead to severe injuries that often require extensive medical treatment.

A study by the Agency for Healthcare Research and Quality (AHRQ) found that, during one recent year, dog bites accounted for:

According to the AHRQ, the most common injuries for dog bite victims (based on the number of hospital stays) were:

What Are Common Dog Bite-Related Infections?

As you can see, infections and disease are serious concerns when a dog attacks. The CDC reports that dog bite victims should be especially concerned about the following:

What is Illinois’ Dog Bite Law?

If you are attacked by a dog, you owe it to yourself to look into your legal options for obtaining compensation for your medical expenses, lost income, pain and suffering and other damages.

In a dog bite lawsuit, what would you need to prove? The answer depends on where you live.

For instance, in 18 states, you must establish that the dog owner either knew or reasonably should have known that the dog had a dangerous propensity. This is commonly called the “one-bite rule.” It is based on a common law principle.

Illinois is not a “one-bite rule” state. Instead, dog bite claims in Illinois are controlled by a “strict liability” dog bite law, 510 ILCS 5/16. Under the statute:

“If a dog or other animal, without provocation, attacks, attempts to attack, or injures any person who is peaceably conducting himself or herself in any place where he or she may lawfully be, the owner of such dog or other animal is liable in civil damages to such person for the full amount of the injury proximately caused thereby.”

So, to establish your right to recover damages, you do not need to show that the owner knew or had reason to know the dog could bite. Instead, you must prove three elements:

You should note that liability can attach to either the actual owner of the dog or the person who was actually in control of the dog at the time of the attack. For instance, if the owner left the dog with a neighbor, and the neighbor assumed control of the pet, the neighbor could be sued for damages if an attack occurred.

Generally under Illinois law, you have two years from the date of a dog bite in which to file a claim.

Which States Have the Highest Number of Dog Bite Claims?

According to a study by the Insurance Information Institute and State Farm Insurance, Illinois had the second-highest number of those claims in 2015 with 931. Only California saw more dog bite insurance claims with 1,684.

The total number of dog bite claims in the U.S. actually fell by 7.2 percent in 2015, the study found. However – perhaps due to the severity of the victims’ injuries and soaring costs of health care – the average cost of dog bite claims actually increased by 16 percent.

Are There Any Dangerous Dog Ordinances in Illinois?

Many cities in Illinois, including Chicago, have a “dangerous dog” or “dangerous animal” ordinance. The goal is to keep dangerous pets away from the public and to prevent dog bites.

Ultimately, a local animal control officer will determine whether a dog meets these criteria. If an attack occurs:

A violation of this ordinance could lead to a fine of up to $1,000 and/or impoundment of the dog.

Several communities – but not the City of Chicago – have enacted breed-specific “dangerous dog” legislation. For example, the City of North Chicago Municipal Code § 8-17-1 imposes several requirements on any owner of a pit bull that is at least six months old. Those requirements include:

You should also note that Chicago has a leash law (Chicago Municipal Code § 10-36-020). The law basically requires dog owners to keep their dog on a leash (no longer than six feet) when in public areas (unless there is a sign posted declaring it to be a “dog friendly area”).

If a dog bites a person or another animal, Chicago Municipal Code § 7-12-090 requires the owner to report the incident to the Animal Care and Control Commission within 24 hours.

What Should You Do If a Dog Attacks?

If you or a loved one suffers a dog bite or other injuries due to a dog attack, you should take the following steps in order to protect your health and your legal rights:

Wash any bite wounds with hot soap and water right away. Seek immediate medical attention (through an emergency room or your family doctor).

Report the incident to your local animal control office or the police department (especially if you have no idea whether the dog has a current rabies vaccination).

Take photos of your injuries, if possible.

Keep and do not wash any clothes you were wearing when the attack happened.

Gather and store copies of any medical bills and receipts from any other dog bite-related expenses you have incurred.

Take a moment and write down everything you can remember about the dog bite incident, making a note of where it happened, who appeared to be in control of the animal and what you did immediately before and after the attack.

Get in touch with a personal injury attorney without delay in order to learn more about your legal rights and options.

The experienced dog bite lawyers of Salvi, Schostok & Pritchard P.C., are available to provide immediate legal assistance if you or a family member has been bitten or attacked by a dog in Chicago, Waukegan or elsewhere in Illinois.

Call or reach us online today to discuss your case in a free consultation.